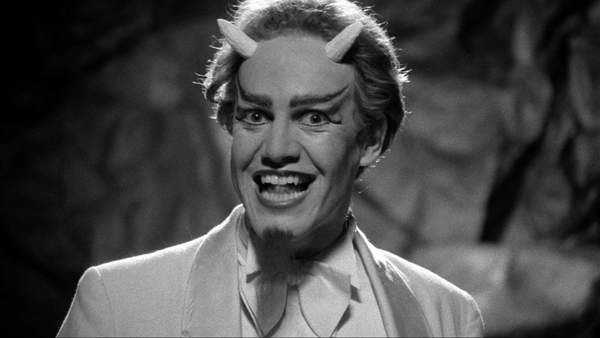 Let’s not pussy foot around, this early eighties cult musical is likely to drive most of you up the wall faster than a cat punted by a star quarterback. Made over three years by Richard Elfman primarily as a record of the cabaret performances of his musical cabaret troupe The Mystical Knights of the Oingo Boingo, Forbidden Zone evolved into a demented comedy musical. The film’s influences are many and varied including Alice in Wonderland, The Wizard of Oz, German expressionism, Betty Boop cartoons and underground 60s comix.

A synopsis is pretty much pointless but I’m gonna try anyway: the Hercules family move into a house with a mysterious door to another dimension in the basement. The family’s daughter Frenchy discovers this after schoolfriend Squeezit (Toshiro Boloney, actually a pseudonym for Mystical Knight and future writer/director Matthew Bright) tells her that his transgender sister René (also played by Bright) has disappeared in the house. Frenchy decides to take a peek and is transported to a strange land ruled over by midget King Fausto (Hervé Villechaize from TV series Fantasy Island and The Man With The golden Gun) and wicked Queen Doris (Susan Tyrrell, ultra vamping like Gloria Swanson let loose at a gay pride march). Frenchy’s brother Flash and Gramps set out to rescue her and encounter the perpetually topless Princess, a half man-half frog manservant, and are banished into a septic tank by the Queen.

In and around this madness there are striking animated sequences by John Muto that recall Ralph Bakshi and Terry Gilliam. The music is by Richard Elfman’s younger brother Danny Elfman, in fact this was the four time Oscar nominee and Grammy Award winner’s first full feature score. Along with the original music there are a number of standards by the likes of Cab Calloway and Josephine Baker to which the cast lip-syncs in production numbers of varying degrees of elaborateness. Danny Elfman also makes a screen appearance playing The Devil singing Minnie the Moocher. This and the classroom set Alphabet Song are highlights, although Tyrrell’s Witches Egg performance is my personnel favourite. Cult movie enthusiasts should also look out for appearances by Warhol actress Viva and Joe Spinell of Godfather and Maniac fame.

At the time of Forbidden Zone’s original release it fell foul of political correctness. Satirical use of blackface led to Richard Elfman being accused of racism (the sequences in question are significantly less questionable than those used in Little Britain or Come Fly With Me). Elfman disputes these claims, citing the fact that he grew up in the Crenshaw district of South Central L.A. Despite Elfman being himself Jewish, another comic caricature in the film even generated claims of anti-semitism. The controversy was such that the director received arson threats (recounted on the extras that accompany the excellent Arrow release of the film) when trying to show the film in colleges. Eventually Elfman moved on to other projects. However whilst the director was occupied elsewhere his film found an appreciative audience on the Midnight Movie circuit and became a genuine bona fide cult movie.

Always an obscurity in the UK, Forbidden Zone is ripe for rediscovery and available in the UP on a splendid Blu Ray from Arrow Video. Shot in black and white, the original intention was for Forbidden Zone to be hand tinted frame by frame in China. This idea was abandoned due to cost, but Elfman had the film colorised in 2008. Both versions are included on the disc. The film looks pretty fantastic on Blu Ray, although very low budget, the staging and costumes are imaginative with a handmade feel. The colorised version looks pretty good as well.

This review was originally published on http://www.chrisandphilpresent.co.uk