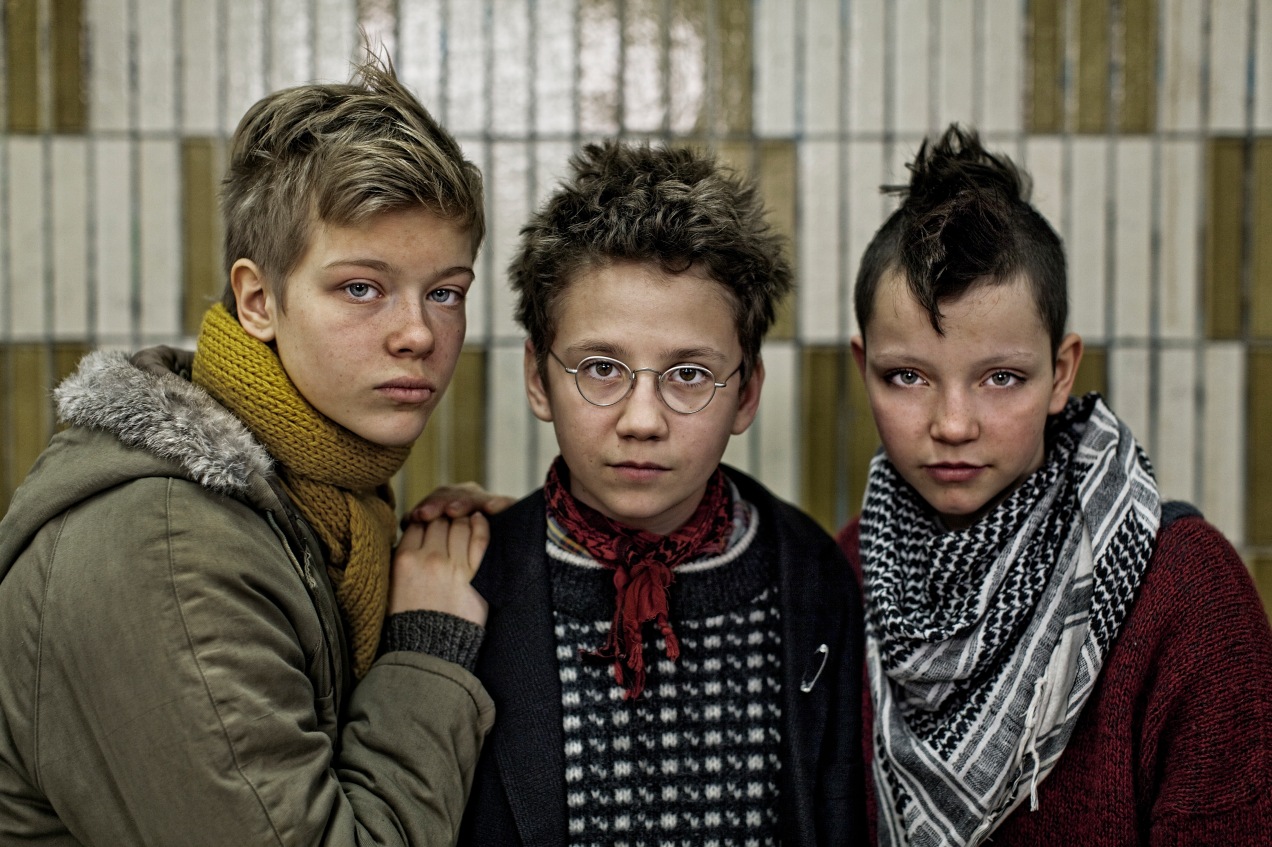 Often lumped together with Danish provocateur Lars Von Trier due to vague geographical proximity and a shared interest in the presentation of confrontational material, it is perhaps surprising that Swedish director Lukas Moodysson should be responsible for one of the most heartfelt, honest and purely joyful films of the year.

Set in Stockholm in 1982 We Are The Best follows the exploits of two rebellious 13 year old girls, Bobo (Mira Barkhammer) and Klara (Mira Grosin). Despite the surrounding teen culture pushing them towards disco, the pair express their frustrations by identifying with punk rock, self administering gender neutral haircuts and wearing loose fitting baggy clothing. Seeking refuge from their liberal middle-class homes the pair frequent a local youth club where Klara is constructing a detailed diorama depicting the effects of a nuclear attack in gleefully gruesome detail (“Let’s set the dog on fire”). Irritated by the sexist taunts of teenage heavy metal band Iron Fist, the girls start a band purely book up precious rehearsal space as revenge.

Of course they can’t play – never mind three chords, not even three notes – despite this they immediately decide they are fabulous and set about writing a cacophonous ode to their hatred of P.E. The fantastic anthem ‘Hate the sport’ features such genius lyrics as ‘The world is a morgue, and you’re watching Björn Borg’, it ought to be nominated for a ‘Best Song’ Oscar. Barred from premiering their composition at a school talent show, they are forced to sit in the audience and wearily watch a parade of conformist amateur variety acts when they hear a classical guitar recital by Hedvig (Liv LeMoyne). Where Bobo and Klara have happily engineered their ostracisation by the student body, Hedvig is unwillingly an outsider due to her Christian beliefs. Impressed by her musical talents Bobo has the idea of asking her to join the band, although her real motivation is to find someone to teach them the rudiments of musicianship.

Moodysson has previously used Swedish disco and Abba songs (in 2000’s Together) so punk seems like a step into unfamiliar territory, but in much the same way that Jaws is not about a shark (copyright Mark Kermode) We Are The Best is not really about punk rock, although paradoxically – like Good Vibrations – it captures the DIY ethic of punk terrifically well. Working in a social realist style Moodysson completely avoids a conventional underdog makes good narrative arc, for these three girls being in a band has nothing to do with record deals, fame or even notoriety. Rather it is an expression of identity, friendship and a desire to find boundaries to push against.

This last is I think is at the heart of We Are The Best, at every turn Sweden in 1982 is presented as a painstakingly tolerant society. Bobo’s parents are separated, and her mother has a chequered romantic life, but the family still has Sunday lunch together. Klara is hilariously mortified by her hippy parents, and even worse her former punk sell-out brother who – horrors – now listens exclusively to Joy Division. There is a key scene after Bobo and Klara pressure Hedvig into letting them cut her blond hair into something more edgy (she ends up looking like La Roux), the girl’s mother is horrified and threatens to call the police (something Klara’s permissive father finds hysterically funny). However the scene that follows in which Bobo and Klara are forced to apologise over tea and biscuits plays out in a way that flies in the face of conventional sneering and comic liberal portrayals of faith-based parenting (it is worth noting that for all that his films are often confrontational and explicit, Moodysson identifies as a Christian himself and has a strong moral outlook).

So the theme explored in the film is ‘how do you rebel from within a permissive society’? Now, there are artists who would express that rebellion in anarchy and violence, and that is perfectly valid and often fun, but that isn’t of interest to Moodysson in this piece. Instead his characters find their rebellion in self expression, humour and sheer exuberance. Visually the film is austere, there is a section in a Stockholm suburb similar to the one seen in Let The Right One In, the period setting is not overplayed, but anyone who grew up in the eighties will recognise the stultifying boredom of Swedish State TV and the overall conformity of the pop culture of the time (symbolised by a ghastly proto-Sparkle Motion spandex-clad school dance troupe).

The three lead actresses are all fantastic: Mira Barkhammar plays Bobo is bookish and introverted, with her particularly androgynous haircut and round glasses she can easily pass for a boy; Klara in contrast is constantly on the verge of spiralling out of control, a restless, fizzing ball of energy and motion with a Mohawk played with remarkable expressiveness by Mira Grosin. The two are fire and ice, Hedvig is the ‘lukewarm water’ of the trio, the necessary calming element that mediates in disputes. Where Bobo is introverted, Liv LeMoyne subtly differentiates Hedwig who is reserved and considered rather than shy (a crucial distinction). This is the performance most easily overlooked, as the character arrives later in the film but by the hilarious and air-punchingly righteous finale her performance has really registered.

There is a later section of the film in which things go a little too Fleetwood Mac as Bobo and Klara squabble over the attentions of a punk boy in another band. I could probably have done with less of this, as frankly I found it a minor distraction from the central story of the power trio. However this is a minor quibble with a film that is easily among the most purely enjoyable movies of 2014.

This review previously appeared on http://www.chrisandphilpresent.co.uk