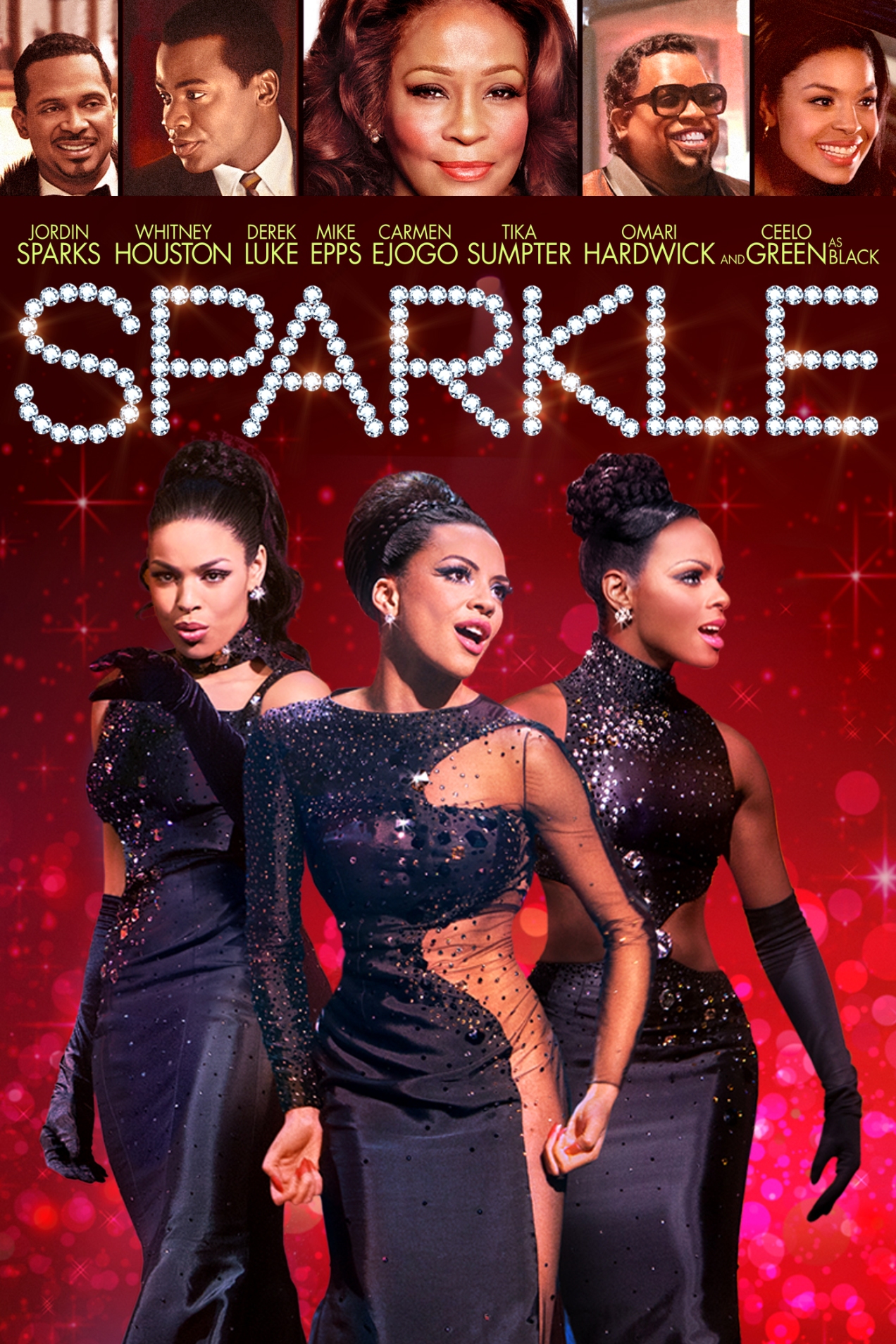 What is the blandest thing you can imagine? 2012 musical drama Sparkle is a double helping of that, with a side order of banal. The only really notable thing about it is that it features the final screen performance of Whitney Huston who died three months after the completion of principal photography.

A remake of a 1976 film, Sparkle is set in a wildly unconvincing fantasy version of 1960s’ Detroit, and charts the rocky road to success of singer-songwriter Sparkle played by American Idol winner Jordan Sparks. Sparkle lives at home with her two sisters, the glamorous Sister (Carmin Ejogo) and feisty Delores (Tika Sumpter). Sparkle’s dreams of a career in music are stifled by their strict, god-fearing mother (Houston, obviously) who’s own failed attempts to break in to the biz have left her embittered towards any singing except that done in church on Sunday. However, Stix (Derek Luke) a wannabe manager, sees the sisters’ potential as a three-piece with Sister taking the lead and Sparkle writing the songs.

Obviously, this is yet another fictionalised version of the story of The Supremes. The most famous version being the musical Dreamgirls (filmed by Bill Condon in 2006). I thought Dreamgirls the movie was a pretty vacuous and toned down version of Motown history, but in comparison to Sparkle looks like Alex Cox’s Sid & Nancy. Honestly, there are so many thinly veiled versions of the this story that once Diana Ross decides to let someone make an actual Supremes biopic it is going to look like a fifth generation copy of itself.

This is a very soft focus film. Lip service is paid to the tremendous social and cultural upheavals of the 1960s, but after a few lines of dialogue and a token use of some Martin Luther King footage on a TV, we are largely in fantasy land. Sparkle is essentially a fairy tale of an ugly duckling who becomes a princess, and presumably it is intended for an audience of little girls. However, Sparks is just as beautiful at the beginning of the film as at the end. In fact everyone in the movie, with the sole exception of a weaselly record executive who symbolises ‘the man’, is really ridiculously good looking. Okay, maybe not CeeLo Green. There is very little at stake, very slight sense of struggle. Despite being apparently deprived the house the sisters share with their mother is a mansion. This is not the Detroit that appeared in Searching for Sugarman.

The major complication that ensues is a domestic abuse and drugs storyline. Although hardly graphic, is not something that most parents are going to want to sit their little darlings down in front off. This is compounded by the presence of Houston. It is very difficult to take the anti-drugs, pro-church values espoused by Houston’s character in light of what we now know about her tragic private life.

Houston was one of the film’s producers and had long nurtured the project. It is easy to see that she might have seen this as a kind of redemptive parable and a way back into the good graces of her fans. Sadly it didn’t work out that way. Her performance in the film is stiff and glassy eyed. There is one particularly excruciating scene where she frankly does not look like she knows where she is. The BBFC warning alongside the film’s 12 certificate states that it contains ‘implied hard drugs use’ a warning that now has a depressing double meaning.

Elsewhere performances range from decent (Ejogo) to barely adequate. The original seventies film had songs by Curtis Mayfield, and these are reused here. Unfortunately R Kelly has been brought in as a consultant, and the music is horrendously over produced. It is blatantly obvious that the actors are miming, and that includes Houston who is given one song that frankly seems to have been crowbarred in to appease fans. The film fails production design 101 as well. Everything looks brand new. Every set wall is freshly painted. There isn’t a frayed collar or an unwaxed car anywhere. Clearly realism is not what director Salim Akil was going for, but it really is plastic fantastic.

Aimed at a predominantly African American audience, this is a dull picture that features none of the passion of genuine Soul.

I couldn’t even recommend it to die hard Whitney fans.

This review originally appeared on the Chris and Phil Presents site after I lost a bet.