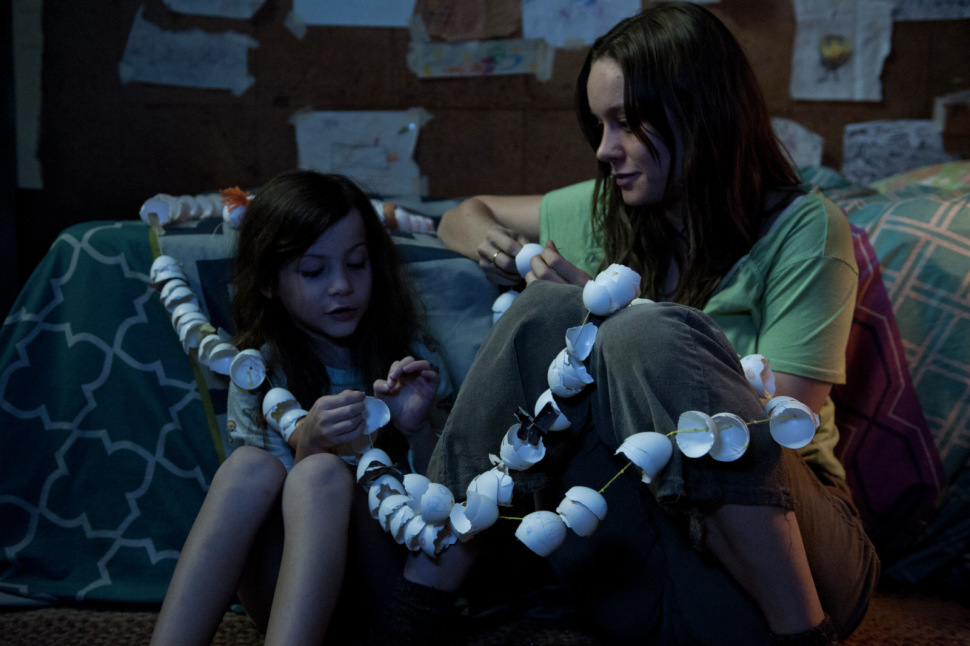 First a warning. Room presents a dilemma to any film reviewer. Although based on a popular and highly lauded novel, it is a film that benefits from being viewed with as little fore-knowledge as possible. Not being familiar with the book I knew only the basic concept and nothing of the shape of the narrative. Because of this, the film contained one sequence that packed in more stomach tightening suspense than anything else I’ve seen this year.

If you haven’t read Emma Donoghue’s novel, I recommend that you don’t proceed past the jump and just go see the film. Come back later. All you need to know is it is brilliant, moving, and despite the subject matter it is a rich and emotionally nuanced film that is neither an endurance test, nor a TV-movie-of-the-week piece of melodramatic misery tourism. If you have been a fan of Lenny Abrahamson’s previous films, which include What Richard Did, and the wonderful Frank, this is another work of exceptional psychological depth.

Anyway, review follows, I’ll try to keep it as plot light as possible, but proceed with caution.

Imagine if you could describe every inch of the known universe, if you had a daily relationship with everything there was, is, and ever would be. Five year old Jack (Jacob Tremblay) can do this. He can describe everything that he knows exists because his world is very small. Four walls, a floor, a ceiling, a partially melted plastic spoon. This is because Jack’s mother (Brie Larson) was abducted as a teenager by a man they now call Old Nick. Imprisoned in a locked room, she has been subjected to a life of sexual abuse, abuse that resulted in Jack’s birth.

Fiercely protective of Jack his mother (who he calls Ma) has raised him alone, doing her best to educate him and shield him from the grim reality of their situation. Jack believes the universe ends when he can touch a wall or the floor. The grainy images on the TV their captor has provided are fantasy, not real.

Ma keeps her son away from their captor as much as is possible. She refuses to acknowledge him as Jack’s father. When Old Nick visits in the evenings Jack sleeps in a closet, his ‘father’ doesn’t seem to care to know him, and Ma seems to have reached an unspoken agreement to serve as his domestic slave so long as he maintains his indifference towards his son.

For Ma, it is very nearly a hopeless situation. There is no possibility of escape from the Room. Only Old Nick knows the code that opens the door. She could kill him in his sleep, but then she and Jack would slowly starve to death. Her love for Jack is the only thing that brings joy to her existence.

The fragile equilibrium of this terrible situation begins to shift when Jack’s curiosity makes him leave the safety of the cupboard which brings him to Old Nick’s attention. With his prepubescent body and uncut hair, Jack is androgynous. His identity is in flux, in the process of forming, and with only Ma as his sole role model. Ma is terrified when he begins to notice his son. The film does not make the nature of her terror explicit. It doesn’t need to. Clearly any man who would abduct a teenage girl, rob her of her future, and subject her to years of abuse is a degenerate.

There are further signs that something is happening outside in Old Nick’s world. One night they wake up freezing and find the heating has been turned of. Ma resolves to take action, but first she must try to explain to Jack a concept alien to him. ‘The world’.

This is a remarkable film, and a huge shift in tone and style from director Abrahamson’s previous movie Frank. What Room and Frank share (apart from editor Nathan Nugent and composer Stephen Rennicks) is an interest in, and sensitivity towards, mental health issues and extreme psychological states. Room is a film about mental and physical trauma (there is a ‘trauma consultant’ in the credits) and explores both its obvious effects and the more insidious long-term damage caused by Old Nick’s abuse.

By making its point of view explicitly that of a child screenwriter Emma Donoghue (adapting her own Booker Prize shortlisted novel) is able to normalise the abnormal. Jack sees his upbringing as completely normal because Ma has shielded him from its reality. This also leavens what should be a very sour dough, by allowing for warmth and humour to exist in an environment that would seem to be very hostile to hope.

Giving a sense of the interior life of a character is something film isn’t particularly good at. A novel can present the candid thoughts of its characters. Film being a primarily visual medium, has difficulty showing the interior life of characters. A book requires the reader to actively construct its narrative in their minds. In film, that is largely the director’s job. Abrahamson and Donoghue use the device of voice-over to help do this, but they are relatively sparing with it, using it to enhance and annotate the onscreen action.

For a film that uses such a restrictive setting, Room feels cinematic from the start. Cinematographer Danny Cohen creates a child’s level view of the world. Old Nick’s first appearance is brilliantly shot from Jack’s point of view. Seen in details through the slats of the cupboard doors, the man seems so huge that only details can be seen. The introduction refuses to grant the abuser centre stage, and even later when for plot necessary reasons we are given a face (that of actor Sean Bridgers) he never becomes the film’s focus.

Brie Larson and Jacob Tremblay both give awards worthy performances. Larson imbues Ma with fierce determination and intelligence. Whilst not hiding the mental damage her character has suffered, Larson does not play Ma as a pure victim, but a character with agency who is doing everything she can to keep her son safe. Tremblay is simply astonishing as Jack, having to give a modulated performance that goes through a wide array of emotional states. He also has to be by turns cute, and then shrill and annoying in the way that only a five year old can be.

There is much more to say about Room, but to reveal more of the way the story develops would be a crime. However, there is one thing I really want to get across. The subject matter, and plot details given above make this sound like a film that is going to ruin your day. You could be forgiven for expecting a posh version of ‘torture porn’ or one of those melodramatic TV movies that dramatise real life horrors into hypocritical victim narratives that allow us to wallow in degradation and feel good about it afterwards. Room isn’t like that. While it is a film that is full of tension, suspense and on occasion horror, it is also a film filled with innocence and even joy. It is a film that will horrify you, one sequence made me so stressed I felt ill. However, it is also a film that will move you in ways you might not expect.

Connoisseurs of great movie double bills will know that the best pair films that both compliment and dramatically contrast with one another, Room would make a killer double bill with We Need to Talk About Kevin. Both films are brilliant. Both are about mother son relationships. Both deal with trauma. But in many other ways the are the complete inverses of each other. Dark and light.