Like I was really going to make you wait… here is part 2 of my films of 2016 list… The main event. The Big Kahuma… The Final Countdown…

But first, what was the worst film I saw on the big screen in 2016? Well, it might not be the actual worst film of the year. I have not the time, or patience to choose to see crap (although note to editors, I will if you want to pay me to do so) but I did see the profoundly awful….

‘What the hell is that Jeff?’ ‘I think it’s… a huge depressing lump of shit’

I swear it has the worst final minute of any film I’ve witnessed in the last decade. Had it ended with a speech by Nigel Farage it would have been better than what was presented.

Half the film is just Liam Hemsworth gurning and going “GRRRRWWEEOOAAAAARRRRRR”.

Anyway, enough of that. Here are my top 10 favorite films of 2016 in reverse order: 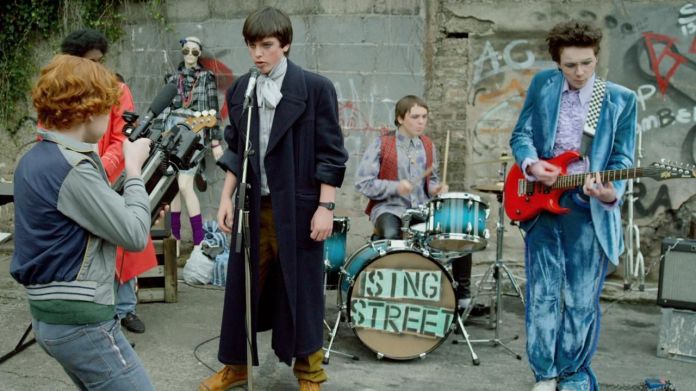 Sing Street is pure unadulterated joy in cinematic form. John Carney’s film took very familiar coming of age/first love material and made it feel fresh. I couldn’t care less if the eighties pop music chronology is slightly whack (any more than I did with Son of Rambow). This was the year’s best musical.

Back in part one of this top 20 I said there were three and a half westerns in the list. This is the half, a contemporary neo-western updating the outlaw myth of the frontier to a modern setting of foreclosures and sub-prime mortgages. The film is the second  screenplay by former actor Taylor Sheridan to be filmed following the brilliant Sicario.

Featuring excellent performances by Chris Pine and Ben Foster as two brothers embarking on a carefully planned crime spree and Jeff Bridges and Gil Birmingham (the later shamefully not name checked enough in the film’s reviews) as the Texas Rangers on their trail.

Stylishly directed by David Mackenzie the film provided one of the 2016’s perfect scenes in which Bridges and Birmingham meet their true match in the form of a West Texas waitress, “We ain’t got no goddamned trout.”

8. The Girl with all the Gifts

An undeserving box office flop on release, The Girl with all the Gifts may have suffered from a marketing campaign over-eager to sell it as a classy Young Adult fable at a time that sub genre has more or less completely crashed. In fact, the film was one of the year’s very best horror films and one that had as bleak a vision as any Romero zombie movie.

Adapted from M.R. Carey’s novel, the film took elements from classic zombie films, aesthetically echoed the video game The Last of Us, but gave the apocalypse a very grounded Home Counties feel (part John Wyndam, part TVs Survivors– seventies version). Like Train to Busan this was an emotional and character based horror film.

One of the most striking horror debuts in years for writer/director Robert Eggars. Set in the 1630s New England with the cast speaking in period accurate yo olde english, the film followed a family cast out into the woods for being too pious and slowly going collectively insane under what may or may not be supernatural influences.

The Witch took a slow burn approach to gothic horror that may have been to classical for some audience members with attention spans reduced to the length of the average YouTube cat video judging by the ridiculous claims from some quarters that the movie wasn’t a horror film.

Put all that aside and surrender to its oppressive atmosphere and this was a film capable of getting under your skin and making it crawl.

The final western in my list and the closest to a classical example of the genre, despite feature levels of graphic violence that led some to (in my opinion) erroneously describe it as a horror film.

Bone Tomahawk was a quest western in which a posse rides out to retrieve a kidnapped doctor and sheriff’s deputy abducted in the night by a tribe of cannibal troglodytes. Like any good western it is as much about the journey as the destination and the long ride into hell that follows is full of some of the year’s best dialogue (much of it delivered by a terrific Richard Jenkins in a part that ought to be Oscar nominated but will never in a million years receive such recognition because we do not live in a just world).

The film features one of the finest rebuttals to the idea of manifest destiny ever uttered in film (in this case by actress Lili Simmons): “This is why frontier life is so difficult. Not because of the Indians or the elements, but because of the idiots.”

This looked gruesome in advance, and the idea of Disney remaking The Jungle Book as a live action movie was obviously awful. So it was a complete shock that in a year characterised by one expensive studio blockbuster after another, Jon Favreau’s faux live action Jungle Book (it is 99% photo-realistic CGI, only Neel Sethi the child actor playing Mowgli is actually real) was a complete triumph.

Opening with a chase scene as exciting as that of Michael Mann’s version of Last of the Mohicans, Favreau deftly mixed the original Kipling with the additions and revisions of the Disney animated classic to come up with version of The Jungle Book that brought action to the forefront. Idris Elba’s version of Shere Khan was genuinely terrifying. Other highlights were Bill Murray voicing a stoner version of Baloo, and Christopher Walken’s playing King Louie as Frank White from King of New York. 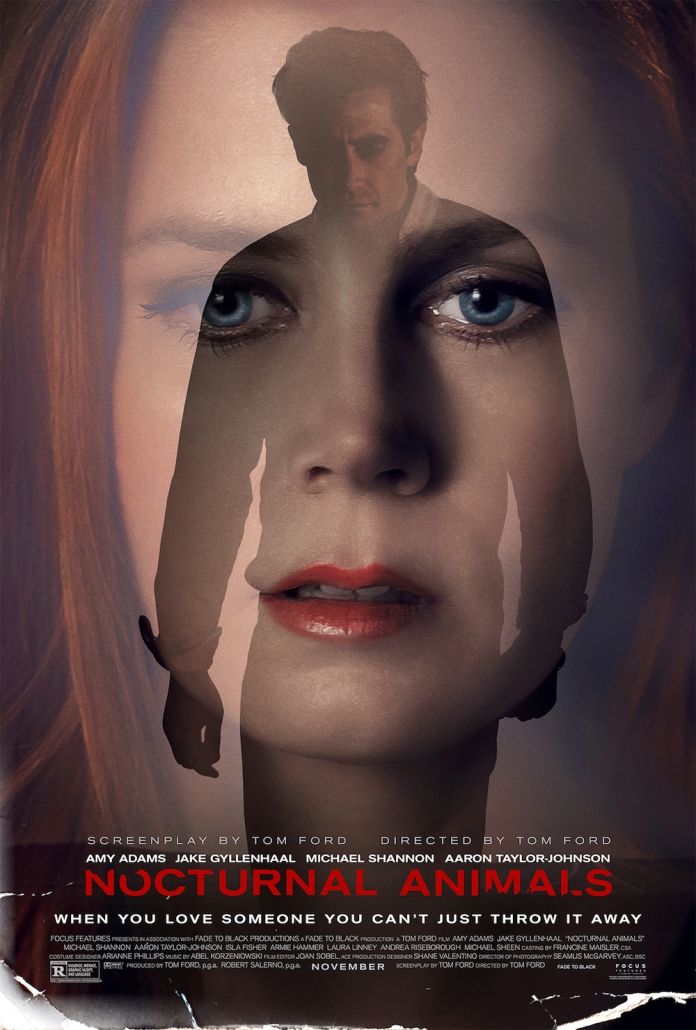 The film has an ambitious post-modern narrative structure. Three storylines intertwine, two are notionally set the ‘reality’ of the film’s world, and one is a fiction being translated through a prism of the life experiences of the movie’s central character an art gallery manager Susan (Amy Adams). She walked away from a previous marriage to an unsuccessful writer (a story seen in flashback) for a life of immense privilege in LA. But that life is fraying at the edges, she is growing distant from her husband, the couple have money troubles, and she is bored with the art world. Then she receives a manuscript of a novel from her ex-husband Edward (Jake Gyllenhaal). As she reads the book we see the story – a brutal West Texas set noir – is brought to life

Each story is compelling and each reflects the other creating an electric atmosphere of unease. The fictional narrative is so viscerally mounted that it feels as real as the present day and flashback stories set in Susan’s ‘real world’.

Green Room is a thriller so tense and cringingly violent that it made me feel physically sick.

Director Jeremy Saulnier’s follow-up to the excellent Blue Ruin follows a very unlucky hardcore band who get booked to play a backwoods club that turns out to be run by neo nazis. Desperate to get away as fast as possible, their bass player accidentally sees something he shouldn’t and they find themselves barricaded in the dressing room. Things get much, much worse from this point onwards.

Featuring one of the final performances from Anton Yelchin who died tragically this year, Green Room proves we lost an actor with the potential to have gone on to far greater things.

Ken Loach had effectively retired from directing, but Paul Laverty’s idea for I, Daniel Blake and the prospect of making a drama on a very small and simple scale tackling the rise of poverty and food banks in contemporary Britain brought changed his mind. Whether Loach would have foreseen the impact of his small movie is unlikely, not only winning the top award at the Cannes film festival, but going on to make more than three million pounds at the UK box office and get mentioned in parliament.

The film is Loach’s most baldly polemical work in years, a stark and forceful attack on the tearing down the welfare state and deliberate use of red tape to discourage rightful benefits claims. I, Daniel Blake received some criticism for being unsubtle, but frankly those who politically oppose Loach’s position have no such scruples and as a simple piece of drama of the film is undeniably powerful.

Terrific debut performances from Dave Johns and Hayley Squires have already been picking up major UK film awards, and in the  unforgettable food bank scene, I, Daniel Blake lays convincing claim to one of the most powerful moments in British film this year.

I saw Son of Saul early in 2016, and no film has come close to unseating it as my favorite film of the year since.

One of the most impressive debut films I have ever witnessed, László Nemes’ film is a truly harrowing holocaust drama that viscerally takes us on a journey into the hell of Auschwitz without ever feeling like a voyeuristic exercise (even impressing documentarian Claude Lanzmann the director of Shoah).

The slight narrative follows (quite literally) a prisoner named Saul Ausländer (Géza Röhrig), Saul is a Sonderkommando, a Jewish prisoner tasked with aiding in the daily operation of the gas chambers and the disposal and ‘processing’ of the bodies. Saul thinks a boy who has died in the chamber is his son and becomes obsessed with providing him with a religious funeral.

The combination of Nemes’ direction, Mátyás Erdély’s cinematography, sound design and Röhrig’s performance make Son of Saul a remarkably immersive experience, but it as an immersion into hell. The word ‘masterpiece’ is thrown around far too easily, often for any blockbuster that succeeds in being better than adequate, it has been reduced to hyperbolic noise plastered under stars on posters lining tube platforms. Nevertheless, Son of Saul is a masterpiece. A brutal but humane portrait of mans inhumanity to man. It is vital cinema.