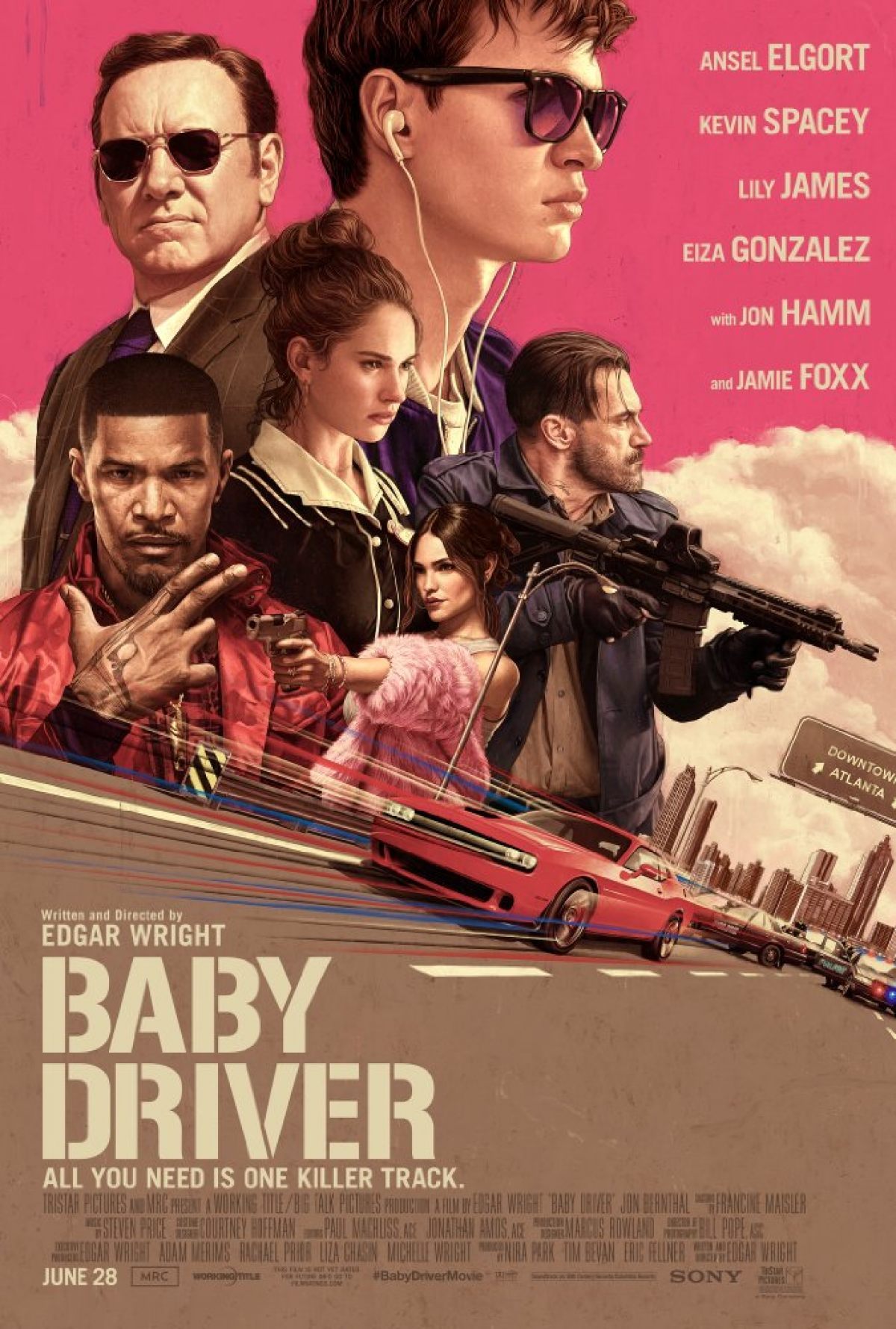 Fresh from viewing just this morning – so excuse the typos I know are going to be in there – here is my review of Edgar Wright’s glorious new thriller Baby Driver. Strap in.

Baby Driver is the story of a young getaway driver known only as Baby (Ansel Elgort). Ears damaged in a traumatic and formative childhood accident, baby suffers from tinnitus and listens to a constant soundtrack on a series of iPods each themed for his mood.

The film’s exciting pre-credit getaway (to the tune of The Jon Spencer Blue’s Explosion’s Bellbottoms) demonstrates that Baby does not just use music to drown out the constant inner noise caused by his disability, but carefully curates songs that he uses to time his driving (high tempos are a must). In much the way that every teenager with a pair of cans on is dreaming themselves into a cool movie with a killer soundtrack, so is Baby. Wright has largely moved on from the ‘meta’ referencing of his earlier work here, except on the level that unlike most teenagers, Baby is in a cool movie with a killer soundtrack.

Baby works for a smooth criminal mastermind named ‘Doc’ played an oily bonhomie by Kevin Spacey. Despite Doc’s outward benevolence Baby is actually being forced to work for him to pay of a past indiscretion. However, with his debt is nearly repaid, he is eager to leaving the criminal life much to the relief of his elderly and deaf stepfather (a genuinely moving performance by hearing impaired actor CJ Jones). Baby has even more reason to put the past behind him when he meets diner waitress Debora and the two fall in love.

But of course, it’s not that simple and when Doc threatens to harm those closest to him Baby is pulled back in for another high stakes heist. The heist is further complicated when Doc hires Bats (Jamie Foxx) a violent and unpredictable psychotic. Baby is caught in a trap from which he can’t get out.

The comfortable upward gradient of Edgar Wright’s career hit some pot holes in the past few years. The final part of his ‘Cornetto trilogy’ The World’s End was (for me at least) a messy disappointment. Then, due to the depressingly ubiquitous ‘creative differences’, he was forced to depart from Marvel’s Ant-man a film he had been developing with Joe Cornish for over a decade. But in a month which as seen the directors of the upcoming Han Solo film fired during principal photography, Wright may have been canny in vacating the director’s chair before being forced to compromise.

While we can only speculate as to what Wright’s Ant-man would have been like, Baby Driver shows the director staking a claim for auteur status with a taut and concise script and a directing style that while it feels as energized as any of his earlier film and TV work demonstrates a new maturity. On this outing Wright has trimmed away some of his trademark stylistic ticks (especially the use of needle scratch cuts and crash zooms) without sacrificing thrills and excitement. He still shoots Baby walking buying coffee and walking across the street with as much, if not more verve and energy than the car chases.

In this he is greatly aided by a super crew of collaborators. Cinematographer Bill Pope is veteran of action cinema with a CV that includes The Matrix Trilogy. Pope and Wright elect not to shoot in the oversaturated orange and teal style that characterizes naughties action films, opting for a cleaner and more naturalistic color palate closer to seventies and eighties cinema. In fact at times, this feels like a synthesis of American Graffiti and Point Break in its mise en scene (I FINALLY used ‘mise-en-scene’ in a review). Which is not to say that Baby Driver is not stylized, one scene in a laundromat features a wall of dryers each spinning color coded laundry.

Two editors Jonathan Amos and Paul Machliss faced an intricate task of cutting the movie in time to a near constant jukebox soundtrack that in some ways is the films real star. This is probably not the sort of film that will score big in awards season, but technically it is a tour-de-force (OMG more French, what is this. Cahiers du Cinema?).

As turbo-charged as the film making is here,  Baby Driver is also fuelled up with a terrific cast. In the lead role Ansel Elgort is a revelation, bringing the lip curl and swagger of a young Elvis along with a James Dean-esque vulnerability. Lily James plays Deborah as the distilled essence of sugar, spice and all things nice. Spacey is having a ball being Kevin Spacey. As charming thrill junky Buddy, Jon Hamm gets to wear the coolest jacket I’ve ever seen (can someone please give me costume designer Courtney Hoffman’s number please). Eiza González is terrific as Buddy’s partner in crime, as tough as any of the males. Jamie Foxx is outright unpleasant as Bats the most unhinged of the criminals sporting what looks like a Goya tattooed on his neck.

Wright’s lean screenplay shifts the emphasis and status of the criminal crew around Baby, playing a game of musical chairs with the antagonist’s seat. Far more that an exercise in sheer visual style, the story has depth and intelligence. Baby and Debora’s sweet vanilla romance is mirrored by the darker relationship of Buddy and Darling.

While it is very different in tone and style, Baby Driver shares something with Nicholas Winding Refn’s Drive. Like that film some viewers may be surprised by how little car chase action there is in the picture. Baby Driver is more interested in character than hardware. This is very much not a film where the cars are the stars. Unlike the Fast & the Furious franchise, the getaway rides Baby uses are neither super, muscle or classic cars. A bright red Subaru and a briefly used Dodge Charger are about as flashy as it gets. Like Ryan Gosling’s getaway driver in Refn’s film, Baby is shown driving tactically to evade the cops, rather than pulling off corkscrew jumps and flipping onto two wheels like he’s in Cannonball Run. In fact Wright tops Refn’s invention in an early scene with an automotive version of the pea in the shell con trick that is so delightful it made me clap my hands at the Baby’s skill and audacity.

The film’s final star is an eclectic and extremely well selected selection of songs that are far more than a simple jukebox collection of marketable tunes. None of the songs leap out as obvious commercial choices, rather they are a secondary script providing a both a commentary on the action, and also a kind of melodic interior monologue for Elgort’s character. In one audacious sequence The Damned’s Neat Neat Neat is played not once, but twice, because an argument among the criminals in the back of the car means Baby has to rewind and cue the track again so the beat drops in the right place.

Baby Driver injected me with more pure unfiltered premium hi-octane joy than any other movie this year.